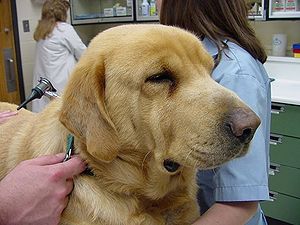 Veterinarian Reviewed on May 25, 2012 by Dr. Janice Huntingford

Hypothyroidism is an endocrine disorder that commonly affects dogs. In fact, hypothyroidism is the hormonal disorder most frequently experienced by canines. This disorder affects a dog’s entire body and can significantly detract from you pet’s happiness and enjoyment of life. This disorder can also lead to additional medical problems, compounding your pet’s ill health and discomfort. The good news regarding canine hypothyroidism is that it’s relatively easy to treat. So in order to prevent unnecessary suffering and the development of further health complications, it’s important to begin treatment of hypothyroidism as early on as possible. In order for this to occur, prompt diagnosis is necessary. So if your canine buddy is behaving oddly or seems to be feeling under the weather, consult with a veterinarian so that the problem can be identified and dealt with quickly.

Since canine hypothyroidism affects a dog’s entire system, the potential signs and symptoms of this disorder are numerous and varied. However, one warning sign that tends to appear early on and in the majority of cases is a gradual onset of listlessness and lethargy. A dog with this endocrine disorder may appear to become mentally dull as well as physically dull, and may also begin to gain weight despite an apparently low food intake. Coat changes are also common. The dog’s hair tends to lose its luster and becomes greasy with time, and will also shed excessively. This often leads to bald spots, especially on the dog’s trunk and hind legs. Hair loss on the animal’s tail is also symptomatic of hypothyroidism, typically leaving only a small tuft of hair at the end of the tail. This hair loss occurs due to the unhealthy state of the afflicted dog’s skin, which can also give rise to recurrent skin infections and an unpleasant odor.

Other symptoms commonly displayed by dogs with hypothyroidism include drooping eyelids, general weakness, and low tolerance for exercise. Canines with this disorder also tend to prefer warm environments. Some dogs suffering from hypothyroidism experience seizures and others become infertile. Since these symptoms and warning signs are so varied, they can also be indicators of other illnesses and medical conditions. So if your dog is exhibiting any of these behaviors or symptoms, it’s important to contact a veterinarian immediately so that the underlying cause can be identified and a treatment plan can be implemented. If your dog is feeling under the weather, a veterinarian will go over your pet’s medical history and conduct a physical examination. If the history and/or physical exam suggest the possibility of hypothyroidism, a number of tests will be conducted in order to confirm a diagnosis of this endocrine disorder. General blood tests will be run in order to check for high levels of blood lipids as well as high blood cholesterol, both of which are often seen in dogs with hypothyroidism. In addition, approximately fifty percent of dogs suffering from this hormone disorder also suffer from anemia, so this condition will be checked for as well.

While there are numerous tests that can be employed when canine hypothyroidism is suspected, diagnosing this condition is not always easy. Hypothyroidism often resembles other diseases and illnesses, and many of the diagnostic tests can be affected by drugs, obesity, and other medical conditions. However, when a number of diagnostic tests are used together, a confident diagnosis can often be achieved.

Pathophysiology
A dog’s thyroid is a small dual-lobed, butterfly-shaped gland located in the neck. The thyroid produces hormones, which are chemicals that are transported via the bloodstream and act upon tissue physiology. Namely, the thyroid is responsible for producing the hormones thyroxine (T4) and triiodothyronine (T3), both of which play a significant role in a number of important physiological functions, including growth and the regulation of metabolism. When a dog develops hypothyroidism, thyroid activity drops and production of thyroxine is deficient. Since thyroid hormones participate in a wide array of different physiological tasks and functions, improper function of this gland has numerous and varied consequences. Moreover, since thyroid hormones regulate metabolism and determine the rate at which the body’s cells burn fuel, hypothyroidism affects every cell in a dog’s body. This disruption of normal metabolism is what gives rise to the common symptoms of listlessness and lethargy.

A dog’s thyroid acts as a master gland, controlling almost every tissue in the dog’s body to at least some extent. As a result, it’s not surprising that a disruption of normal thyroid function gives rise to so many different symptoms and health problems. While thyroid disorders in cats most frequently manifest themselves as hyperthyroidism (overactive thyroid), hypothyroidism is by far the most common form of endocrine disorder in canines.

Causes
The majority of cases of canine hypothyroidism, almost ninety percent, arise as a result of an immune disorder. This involves the dog’s immune system attacking its own thyroid gland and is referred to as autoimmune thyroiditis or Hashimoto’s Disease. When the immune system attacks the thyroid gland, it eventually causes destruction of the thyroid, triggering the onset of the symptoms characteristic of hypothyroidism. Why exactly this occurs is not fully understood. However, there are certain factors that are believed to contribute to the onset of such an immune disorder. For example, some believe that too many immune-stimulating vaccines can lead to autoimmune thyroiditis. Furthermore, breed and genetics are known to play a role in the development of this type of thyroid disorder. As a result, certain breeds are particularly prone to developing hypothyroidism, including Cocker Spaniels, Golden Retrievers, Great Danes, Irish Setters, Poodles, and Boxers.

In addition to genetics and autoimmune thyroiditis, there are several other potential causes of dog hypothyroidism as well. These possible triggers included cancer, the surgical removal of the thyroid gland, and low levels of iodine in the diet. Moreover, some causes of this disorder are completely unknown (idiopathic). Thus, canine hypothyroidism can develop for many different reasons, although immune disorders are responsible for the majority of occurrences of this endocrine condition.

Treatment
Regardless of the disorder’s cause, canine hypothyroidism is typically treated with thyroid hormone supplements. L-thyroxine (T4) tablets are generally administered twice a day, although treatments are often started slowly in order to allow the animal’s heart to adjust. Once treatment has begun, significant improvement is often observed in just a few weeks. Regular veterinary checkups and occasional follow-up blood tests help to keep track of the patient’s progress and to keep medication at optimal levels.

Homeopathic remedies can also be very beneficial for dogs suffering from hypothyroidism. Some dogs benefit from kelp and seaweed, which contain iodine. Vitamin A, vitamin C, the B vitamins, and Omega 6 fatty acids are also known to aid hypothyroid canines. Other beneficial substances include alfalfa, fennel, and oats. Some natural herbal tonics are available that combine several natural ingredients to provide numerous beneficial effects for pets with hypothyroidism. Such tonics may include ingredients like Siberian ginseng and kelp, which stimulate metabolism and balance thyroid activity. Furthermore, natural substances such as milk vetch and licorice help to boost the immune system while also promoting overall good health. Since so many natural ingredients have an array of beneficial, health-promoting properties, homeopathic remedies can provide a great form of treatment for many dogs suffering from hypothyroidism.

1.Talk to your doctor about taking hormone pills – the most common form of treatment.

2.Understand that these pills provide the hormone levels the body cannot produce on its own.

3.Be prepared for it to take a few months before your symptoms disappear.

4.Realize that your dose may need to be adjusted a few times before your hormone levels stabilize.

5.Have follow-up blood tests to be sure your hormone levels are healthy.

6.Continue to visit your doctor at least once a year, because changes in weight and pregnancy can affect the dosage of medication you need.

7.Be on the lookout for the possible reappearance of any of your symptoms.

8.Remember that you will probably need to continue these pills for life.